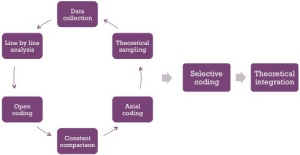 What the heck with Grounded Theory?

In the late 1960’s, Barney Glaser and Anselm Strauss observed that the dominant research protocol at that time was to a) verify an a prior theory or b) logically deduce theory based on analysis of accumulated data. The response, they developed Ground Theory, which posited that theory undergirding a study can be “grounded” in the process of accumulating and coding data acquired during the research process.

In order a theory grounded in research requires a highly iterative process. Springing from dynamic, generative questions, the research begins to gather textual data, then codes and categorizes that data to identify core concepts that will guide more refined research as the study progresses. The result of these iterative steps is a theory rooted in the analyzed texts themselves.

“ [T]he grounded theorist collects verbatim transcripts of interviews and reads through a small sample of text (usually line by line) (Ryan and Bernard 783)…[then] begins with proofreading the material and simply underlining key phrases. As grounded theorists develop their concepts and categories, they often decide they need to gather more data from informants. “

Resource: Chapter 29 of the Handbook of Qualitative Research, 2nd Edition, by Ryan and Bernard (2000)

The Research Methods Knowledge Base website explicates the analytic strategies of grounded theory:

Constant comparison method: As categories emerge, they may be compared and contrasted: “When, why, and under what conditions do these themes occur in the text?” (Ryan and Bernard 783).

Conditional Matrix: Presented as a set of concentric circles, “the matrix is designed to help investigators be more sensitive to conditions, action/interactions, and consquences of a phenomenon and to order these conditions and consequences into theories” (Ryan and Bernard 783).

In performing negative case analysis the research identifies textual units that do not confirm to the current iteration of the codebook and adapt or revise the codebook so it more accurately reflects all textual data so far accumulated.

The results of the research “are often displayed through the presentation of segments of text—verbatim quotes from informants—as exemplars of concepts and theories…[and also] in maps of the major categories and relationships among them [known as ] concept maps” (Ryan and Bernard 783).

Grounded Theory: What in it for Me?

I think the coolness of Grounded Theory resides the in fact that it is so important for qualitative researchers fully explain and justify their methodology and fully explicate their process because, as Dr. Carl Herdl says, qualitative research, the subject of which is the decidedly unquantifiable humanity, is all about “disciplined subjectivity.”

Grounded analysis does two things that make it expertly adapted to qualitative studies: 1. Research begins open-ended research questions that allow the research to enter the research site with what I’m calling (that is, don’t quote me) “directed curiosity,” rather than static and restrictive research questions or hypotheses that would be informed by an a prior theoretical frame; and 2. The research process is not only rigorously documented via memos, but also explicitly tied to data collection and analysis as they occurred in time.

This second advantage results in a body of data that encompasses the actions of both the subjects and the researchers, as well, and also creates a detailed record that validates the credibility of the study.